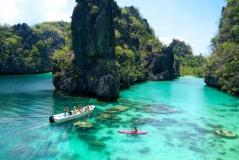 Travel agencies on Wednesday encouraged local entrepreneurs to support the government’s campaign to attract 10 million foreign tourists annually by catering to the demand of Muslim visitors for halal certified food and restaurants.

“Tourism is about total experience and satisfaction. If we cannot assure our Muslim visitors the food we will be serving them strictly follows their religious beliefs, then we are potentially losing out on a big tourism market,” Cabalza said.

Only four hotels in the country have halal kitchens, including The Heritage Hotel, Manila Hotel, Resorts World Manila and Shangri-La Hotel Makati.

The PTAA said Filipino businessmen should not think twice about developing and producing products and services for the market, as halal had become a very lucrative segment to be at least $1.2 billion internationally.

The group said the Philippines was beginning to attract more visitors from countries with sizeable Muslim population, including Malaysia, India and Singapore.

“The government should look at ways to encourage businessmen to set up businesses that cater to the needs of Muslim tourists.  When properly tapped, this market can increase economic activities in many parts of the country,” Cabalza said.

He said one particular support needed was to ensure ease in getting accreditation from government halal certifying bodies specifically in locations frequented by Muslim tourists.

The PTAA said it would look at exploring the possibility of networking with their counterparts in Iran, Jordan and Indonesia.  “We had some talks with Iran’s ambassador to the Philippines and there is an open invitation for us to visit their country,” Cabalza said.

“From what was explained to us, visitors to their country can experience great beaches in the south and the winter season in the north.  We were told that shopping there is also an entirely unique experience,” he said.

He said the talks were at very early stage and they needed to consult with their members if the association would proceed further.