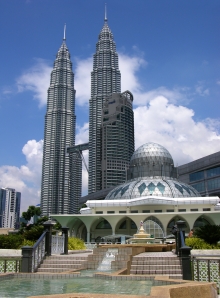 Muslim tourists have long chosen Malaysia, its beaches and its malls as a holiday destination thanks to cultural affinity.

Now the Southeast Asian country, where Muslims make up about 60 per cent of the population, wants to parlay its visitor dividend into a bid to overtake its neighbours for the world’s medical tourism crown.

It seeks to appeal to less affluent patients with reasonably priced treatments. But figures show it has some ground to make up on Thailand and Singapore in boosting its share of an industry that generates $38 billion to $55 billion (Dh139 billion to Dh202 billion) annually.

Malaysia is a new player in the market, competing with experienced, branded names. But it is quickly attracting the attention of patients, earning third place for “best and most affordable health care” by International Living, a lifestyle magazine.

“Thailand’s pricing is not attractive any more and Singapore can’t cope with the flood of patients,” said Jacob Thomas, president of the Association of Private Hospitals of Malaysia.

“We are one of the easiest countries to enter. Most foreigners don’t need to fill in a landing form.” The number of foreigners seeking care in Malaysia more than doubled over five years to 770,134 in 2013. Most patients are from Indonesia, followed by the Middle East and North Africa, areas with plenty of new money and where health care is inadequate or dogged by long waiting lists.

That compares with 850,000 in Singapore in 2012 and nearly 2.5 million last year in Thailand, though that figure includes spa stays and resident expatriates.

Medical institutions have promoted cardiology and orthopaedics, areas with high demand in Indonesia and the Gulf states. And the mainstay, according to Patients Beyond Borders, a medical tourism publisher, is health screenings, which account for more than two-thirds of business.

The UAE spent over $2 billion in 2011 to send patients abroad, according toMedical Tourism Guide 2014.

Also being tapped are middle class patients from countries with poor health systems. Kuala Lumpur’s Prince Court Medical Centre received almost 2,000 from Libya and more than 1,000 from Iran in 2012.

A heart bypass, at about $20,000, is less than half the cost in Singapore, and 10 percent cheaper than in Thailand, Patients Beyond Borders says. Hospital rooms and follow-up treatments are also cheaper.

“Malaysia’s strength has been at conducting high-end surgeries like the heart bypass and orthopedic procedures that are done non-invasively, so they don’t have to stay too long to recuperate,” said Mary Wong, chief executive of the Malaysia Health care Travel Council, a government agency.

Not all industry players back the low-price strategy.

“The way to gain ground is to secure these accounts with government agencies since they are paying for the patients,” said Amiruddin Satar, managing director of KPJ Healthcare , one of three big hospital groups.

KPJ hopes by 2020 to see the share of its revenue from medical tourism jump to 25 per cent from 4 per cent last year.

To the north, business is still flourishing in Thailand, but the military coup in May has posed a problem for patients whose governments have issued travel advisories.

Thailand had a head start, promoting its services after the 1998 Asian financial crisis, when the value of the baht currency sank. Middle East business rose after the September 11, 2001 attacks on US targets, as patients felt unwelcome in the West.

But competition is also heating up from elsewhere.

Dubai and Istanbul are also marketing themselves as hubs for Middle East patients reluctant to travel long distances.

Malaysia is also pursuing a larger share of the Muslim market through halal treatments, which exclude products forbidden under Islamic law, such as those derived from pork.

“For example, insulin, a widely used product in hospitals, we are sure which are bovine or porcine based. Where we can help it, we offer patients halal options,” said KPJ’s Amiruddin.

Islam allows for the consumption of non-halal ingredients in matters of life and death, but hospital pharmacies inform patients of products that are gelatin and porcine free. That includes offering the drug Dhamotil as a halal option for diarrhoea, instead of the commonly used Imodium.

Hospitals are also using sutures manufactured by a local firm made from lambs slaughtered under Islamic law.

Work is underway to produce the world’s first halal vaccines for meningitis and hepatitis by 2017. The target would be Muslim pilgrims going for the Hajj in Saudi Arabia, which requires visitors to be vaccinated for meningitis.

“We realise that if we can come up with halal pharmaceutical products, there’s a big market for it,” said Jamil Bidin, chief executive of Halal Industry Development Corp.

“As far as Muslims are concerned, if you have a halal product, there’s no compromise.”

0 comments on “Malaysia: The Halal and Medical Tourism combo!”