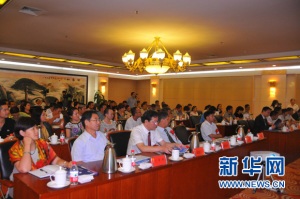 Weng Zhongyi, economic and commercial minister-counsellor of the Embassy of Malaysia to China, said “the trade between China and Malaysia has developed rapidly. The volume reached 106.08 billion U.S. dollars in 2013. Both governments support investment and cooperation of companies in the two countries.”

“Cooperation between China and Malaysia should focus on the advantaged industries, like Halal industry. Against the quick development background, with the cooperation between Port Klang and Ningxia companies, the value of China-Malaysia trade cooperation will be improved” Weng Zhongyi said.

Xia Baowen, General operator of Port Klang Free Zone, and executive chairman of the China-ASEAN international logistics cooperation committee, said, “there are many issues for Chinese companies and products to go abroad. The cooperation between China and Malaysia will help solve those issues.”

He believed there is a lot of potential in the Halal market and Port Klang could be a platform and channel for Chinese Halal industry. Part Klang is the biggest logistic center in Malaysia, and the 12th port in the world. Through this cooperation, China-Malaysia Halal E-commercial Center and International Halal Certificate Service Center will be established in Ningxia, to make Malaysia and Ningxia complementary advantages, and contribute to the global Muslim market.

Xia Baowen said “the cooperation between Port Klang and Ningxia will become the example for the China-Malaysia business and trade area, and achieve the win-win result.”