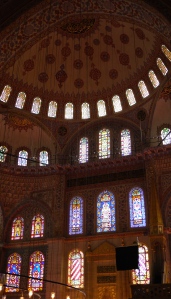 The number of hotels specifically catering to tourists who lead a pious Islamic lifestyle has grown sharply, according to recent statistics from the Mediterranean Union of Hotel Owners (AKTOB).

The figures indicate that there are currently 75 hotels in Turkey deliberately advertising themselves with descriptors such as “Islamic hotel,” “headscarf-friendly,” “conservative vacation” and “halal tourism.” Only five such hotels were operating in 2002, according to AKTOB. The province of Yalova and the beach resort town of Alanya each feature nine hotels that can be included in this category, and the bulk of these hotels are located in areas of western Turkey, many of which are regions known to be heavily frequented by tourists, including Çanakkale, Kaş and Kuşadası.

Prices for rooms in the burgeoning hotels range from TL 70 to TL 2,000, while a private villa complete with a swimming pool may cost as much as TL 5,000.

The hotels do not serve alcohol or pork, feature separate swimming pools for men and women and employ workers who dress in accordance with Islamic customs. They do not broadcast television channels with material considered inappropriate to Islamic values, and they have Internet filters. They include prayer rooms and are isolated from loud external noise, and offer salon, spa, massage and other services.

A recent report on the BBC Türkçe online news portal quoted one tourism manager saying Turkish tourists account for 60 percent of the guests at these “halal” hotels, while 40 percent of guests are foreign visitors. He said that demand for such services had skyrocketed in Turkey, as domestic and foreign tourists increasingly wish to avoid staying at hotels that serve alcohol and non-halal food and often host a large number of guests who drink alcohol during their stay.

“If a tourist says, ‘I’m comfortable, this is what I want,’ there is nothing you can say. We have respect for every kind of person. There are 50 different ways [of life], so we are forced to offer other kinds of services. There is no single type of tourist. We cannot choose tourists. Tourism needs to be of service to everyone. There is an element that is gradually becoming conservative. The tourism sector needs to be tolerant of covered women as well as people who are half-naked. Both need to be comfortable,” the Aydınlık daily quoted Tourism Journalists Association (TUYED) President Kerem Köfteoğlu as saying last month.

The recently released Muslim Traveler Index Europe 2014 estimates the size of the global Halal tourism market at TL 300 billion ($137 billion). Highlighting Turkey as one of the top few destinations for global visitors with sensitivity to halal products, the index said Turkey could attract “billions of lira” if the country manages to attract “halal tourists” at a desired level.

The halal tourism sector was worth 103 billion euros in 2013, representing around 13 percent of global travel expenditures. This figure is expected to reach 141 billion euros by 2020, according to Muslim Traveler Index Europe 2014.

“Turkey has emerged as a top European destination which Muslims from the Middle East and Far East would like to visit as their next holiday which could be worth billions to the economy,” Muslim Traveler Index Europe 2014 said. The research added that Turkey came fifth on the list of countries that appeal to Muslim tourists as a future place to visit globally.

“We already know that Turkey is already very popular with the Middle East and Malaysian countries, but as the research shows, there are a lot more who would like to come. With the history of Turkey and its strong Islamic heritage and attractions, this is a huge market for the country,” the research note read. “This research represents great opportunity for tourism boards, tour operators, travel agencies, hotels, restaurants and the entire tourism sector in Turkey.”

The 2014 index report said tourists from the United Arab Emirates (UAE) prefer to visit Turkey more than any other country; 39 percent of UAE residents polled in the index said Turkey was their top travel destination. Turkey has witnessed a rise in visitors from Arab countries such as Oman, Saudi Arabia, the UAE and Yemen in recent years.

Global trends indicate that “halal tourism” is on the rise even in predominantly non-Muslim countries that are trying to attract more Muslim tourists. Japan is altering its tourism infrastructure in order to offer Islamic-friendly options as the number of visitors from the predominantly Muslim country of Malaysia increases. Meanwhile, France is also offering “fully halal” vacation packages to accommodate the country’s Muslim citizens.

The Halal Tourism Conference, the first of its kind, will be held on Sept. 22-23 in Spain to bring together the travel industry from around the world to discuss ways of tapping into this niche market. The two-day event hopes to attract tourism boards, tour agencies, tour operators, restaurants, media, hotels and airlines. Turkish Airlines (THY) is the main sponsor of the event.

0 comments on “‘Halal tourism’ a rising trend in Turkey, world”