Fifty years after the world said “Never Again” to the horrors of the Holocaust, genocide took the place in the heart of Europe, in Srebrenica – a municipality located in the Eastern Bosnia.

Srebrenica has become the synonym to Europe’s worst atrocity since WWII.

Today, Bosnia and Herzegovina marks 24th anniversary of genocide. 24 years ago, in July 1995, more than 8,000 Muslim men and boys were killed at Srebrenica only because they were born as Muslims, Bosniaks.

Although Srebrenica is the only mass killing in Balkan wars that has been officially ruled as genocide by the international courts, this atrocity was only the final act in a much broader genocidal strategy—euphemistically dubbed “ethnic cleansing”. The Srebrenica genocide was the planned, systematic, and industrialised conclusion of a four year campaign of forced deportation, torture, mass murder and systematic sexual violence by Bosnian Serb forces in service of their goal to create a “Greater Serbia”.

Genocide does not happen overnight. It begins when hatred and intolerance are left unchallenged or are manipulated for political gain.

With the fall of Yugoslavia, politicians in the region used divisive nationalism to gain power and influence. Propaganda and misinformation were utilised to spread first fear and then hatred, breaking apart decades of trust between vibrant and integrated communities and turning neighbour against neighbour. The lesson from Srebrenica is that no society is invulnerable to prejudice and intolerance. We must all remain vigilant against these forces, and take positive action to build stronger, more resilient communities. 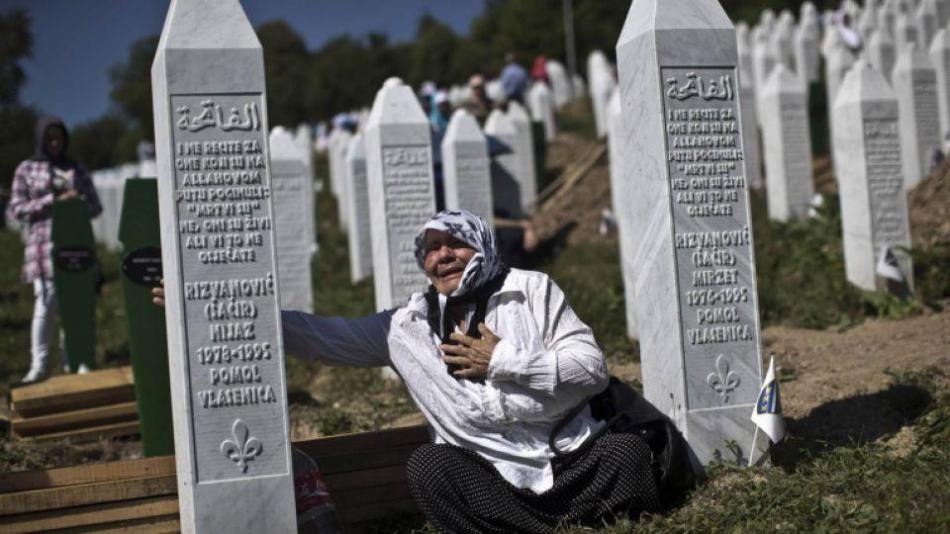 With the support of Yugoslav President Slobodan Milosevic’s government in Belgrade, the Bosnian Serbs – under the leadership of Radovan Karadzic, who is now serving 40 years for war crimes – were attempting to liquidate Bosnia’s Muslim population as part of an attempt to carve a “greater Serbia” out of the ruins of Yugoslavia, the polyglot communist state whose breakup into seven different countries began in the early 1990s. Bosnia has sizable Muslim, Croat, and Serbian populations, and it was the one republic of Yugoslavia without a clear ethnic majority (see map at left).

Milosevic, Karadzic, and Bosnian Serb militants under the leadership of Ratko Mladic used ethnic cleansing to cleave off as much of Bosnia as possible for the Serbian-dominated remains of Yugoslavia.

Two Bosnian Serb soldiers during a “mopping-up operation” near the eastern Bosnian town of Srebrenica on July 13, 1995. (Reuters)

The Srebrenica massacre was the inevitable result: an act of mass murder that conveyed the brutal message that Muslims weren’t safe anywhere inside of the country and that the UN and the international community were unable or unwilling to protect them.

Even 24 years later workers are still sifting through remains and trying to identify bodies, an attempt to restore some humanity to the more than 8,000 people killed at Srebrenica. According to The New York Times, 6,930 bodies have been identified from 17,000 body parts found in dozens of mass graves.

What does it take for world powers to step in and stop human-rights abusers before they can commit Srebrenica-like atrocities? When should international actors step in? If they do decide to intervene, which moral and political responsibilities do they assume? Is a country ever obligated to rescue people when it doesn’t have a clear strategic or political interest in doing so, and should the moral imperative of protecting innocents ever override all other concerns?

Even 22 years after Srebrenica, there’s still no clear answer.