In 2015, Serene Loo, a business director and blogger from Jakarta, went to Japan for her honeymoon. Loo and her husband fell in love with Japan, but as observant Muslims who adhere to halal dietary laws, their dining options were limited.

Last year, when the couple returned to Japan, they were delighted to discover that some restaurants had begun to see potential in “halal tourism” — a niche market that encompasses Muslim-friendly food and drinks, tours with breaks for the five daily prayer calls, visits to mosques and prayer rooms, and halal hotels such as the Syariah Hotel Fujisan.

An alcohol- and smoke-free property at the base of Mount Fuji, the Syariah Hotel Fujisan lends copies of the Quran and prayer rugs to guests, has a prayer room with facilities for ritual washing, and uses arrows on the ceiling of each guestroom to indicate the direction of Mecca, which Muslims face during prayer.

“It was heartwarming to see [Japan] welcome us back with many more new Muslim-friendly establishments. And guess what? I finally got my fill of authentic Japanese halal ramen. Lots of it,” Loo blogged.

Halal tourism is not new. It has been around since there have been Muslims, and accounts for 11.6% of global tourism expenditure, according to data from Thomson Reuters and DinarStandard, a U.S.-based research and advisory group. But the market is changing rapidly. Muslim tourists walk under a display of Chinese lanterns in Kuala Lumpur. Malaysia ranks as the No. 1 destination for halal tourism in the latest Global Muslim Travel Index.    © AP

A decade ago it was dominated by baby boomers who traveled to Muslim-majority countries such as Saudi Arabia, the United Arab Emirates, Turkey, Morocco, Egypt, Indonesia and Malaysia. Now, halal tourism is the fastest-growing travel niche in the world, and social media brands such as Instagram and low-cost airlines like AirAsia are inspiring the next generation of educated and upwardly mobile halal tourists to visit Asian destinations such as Japan, South Korea, Singapore, Thailand and Bali.

In 2018, there were 140 million international Muslim travelers, according to the latest Global Muslim Travel Index from Mastercard and Crescent Rating, a Singapore-based authority on halal tourism. By 2026, the segment is expected to grow to 230 million people, who will inject a projected $300 billion into the global economy.

Yet halal tourism remains relatively untapped, according to Safdar Khan, Mastercard division president for Indonesia, Malaysia and Brunei. “To seize this opportunity, hotels and tour operators need to understand and meet the cultural and religious needs of Muslim travelers, to create tailor-made products and services for them,” Khan said.

Faeez Fadhlillah, CEO of Malaysia-based Muslim travel platform Tripfez, put it like this: “The mindset [of Muslim travelers] has shifted from ‘what is available to me?’ to ‘what I want must be fulfilled.” Malaysia, which attracted 5.3 million Muslim tourists last year, ranks as the No. 1 place in the world for halal tourism on the GMTI’s top 10 list. It has one of the most developed economies in Southeast Asia, and boasts a full complement of halal tourism assets. Mosques and halal-certified venues are omnipresent.

Prayer rooms can be found in handy places such as convention centers, airports and shopping centers. There are resorts with gender-segregated pools, such as the Adya Hotel in Langkawi, and Islamic cultural attractions like the Islamic Arts Museum in Kuala Lumpur and the Islamic Arts Garden Complex in Selangor, on the outskirts of the capital. Indonesia, which for the first time ranked equally with Malaysia in the 2019 GMTI, also has abundant halal infrastructure. It attracted 2.8 million Muslim travelers in 2018, 18% more than in the previous year.

“Indonesia’s ranking has been steadily increasing over the last few years,” said Crescent Rating CEO Fazal Bahardeen, highlighting government initiatives such as the promotion of 10 halal travel destinations, including Aceh, the Riau Islands, Jogjakarta and Lombok.

Indonesia is also unique as a Muslim-majority country with an emerging halal destination — the Hindu-majority island of Bali. “Many Muslims come to Bali from countries like Malaysia, Brunei and the Middle East,” said Munip Wahyudi of Salba Tours, a halal specialist. “But they worry about how to get halal food and where to pray. That’s where we come in.

“We offer multi-day tours where everything is taken care of. Hotels in Bali don’t serve halal breakfast, so we pick them up and take them to a halal cafe every day. We visit mosques around the island and give them several prayer breaks every day. If seeing tourists in bikinis and partying is a problem, we minimize their exposure by avoiding touristic areas like Kuta and take them to beaches where there are not so many foreigners.” Last year Thailand opened its first fully halal hotel, the luxury 242-room Al Meroz in Bangkok, where solo female travelers can stay on a floor with only female staff on duty. (Photo by Rie Ishii)

Singapore, which saw a surge in halal-certified cafes, Asian-fusion eateries, food courts and hawker stalls in 2018, holds the pole position on the GMTI’s top 10 list of non-Muslim majority nations.

Thailand is in second place. Last year it opened its first fully halal hotel, the luxury 242-room Al Meroz in Bangkok, where solo female travelers can stay on a floor with only female staff on duty. Visitors can also get a free copy of Halal Check in Thailand, which contains a list of halal-certified restaurants, or download Thailand Muslim Friendly, a free app created by the government to help Muslim travelers locate halal products and services.

It is here — in the digital space — that halal tourism has the most room to grow, especially in technology-hungry, demographically young Asia. In 2018, online travel purchases by Muslim travelers generated $45 billion a year. By 2026, the figure will quadruple, according to the GMTI. 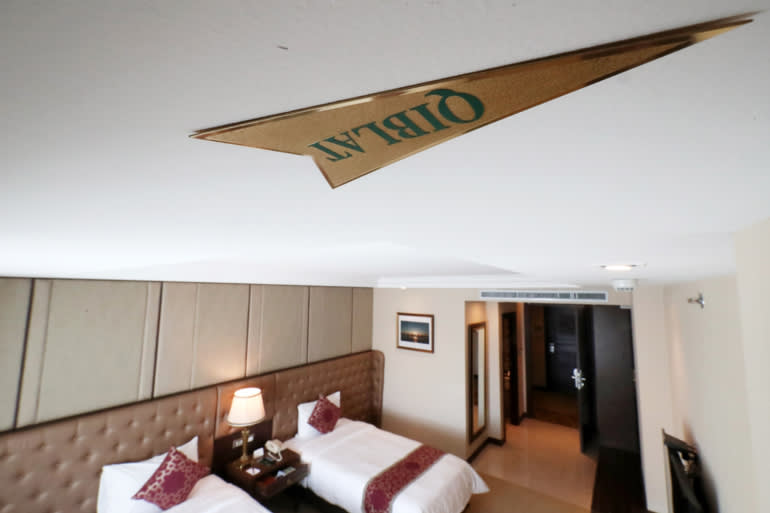 Rooms at the Al Meroz have arrows on the ceiling to help guests find the direction of Mecca. (Photo by Rie Ishii)

“The last few years have seen ‘Halal Travel 1.0,’ where destinations and businesses have been embracing this market and looking at how to better cater to their needs,” the index reports. “The next phase, Halal Travel 2.0, will be enabled by technologies such as artificial intelligence, augmented reality and virtual reality to redefine every stage of the Muslim tourism experience, from planning and purchasing to living the experience and sharing the adventures with others.”

The index’s co-author, Crescent Rating, is ahead of the game. Its digital asset, halaltrip.com, a one-stop halal travel agent, allows travelers to find the direction of Mecca from anywhere in the world.

Halal travel influencers are also proliferating on social media. They include Aida Azlin in Malaysia, who organizes female-only tours in Muslim-friendly destinations, and Nurul Humairah, a deaf woman from Singapore who documents how she overcomes her disability while roaming the streets of Bangkok or climbing Lombok’s Mount Rinjani.

Then there is Have Halal Will Travel, a Singapore-based online travel guide that stakes a claim as the Lonely Planet of halal travel in Asia. “Being Muslim travelers, we realized how challenging it was to find information when we travel, especially to non-Muslim majority countries,” said co-founder Suzana Tengku. “Information was very fragmented across the internet and it was unreliable. On top of that, we could not find a resource platform that provided us with information on how to have more immersive travel experiences while staying true to our faith.

“But we knew that there were many other travelers like us, and decided to start Have Halal Will Travel as an experiment in 2015. Our very first article was a guide that covered the top halal local food in Hong Kong. It was a hit, and encouraged by our small success we started churning out more guides covering popular and upcoming destinations like Japan and [South] Korea, week after week. Now, we reach 9.4 million people across various digital platforms every month.”