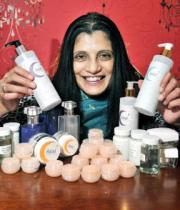 A WOMAN who set up her own cosmetics range has celebrated its first anniversary by being nominated for Business Woman of the Year in the British Muslim Awards.

Salma Chaudry, 46, who runs The Halal Cosmetics Company, Pendle Enterprise Haven, in Nelson, set up the company after investigating the ingredients of the cosmetics she used.

In 2009, after being given the news she had breast cancer, Salma began looking into her lifestyle to see if there were any connections to her diagnosis.

When she researched ingredients in the cosmetics she used, she was alarmed to find what was in them.

As a Muslim, the mother-of-four was concerned to find many contained animal products, with no sign of whether they met Islamic law, or contained alcohol.

Salma, who lives in Blackburn, said the nomination rounded off a busy year.

She said: “I heard about the nomination on New Year’s Eve. The range has done well and I’m now in talks to export to Saudi Arabia, Dubai, the Netherlands and Scandinavia.

“I sell halal products suitable for Muslims, but also suitable for many vegetarians, those who abstain from alcohol, or are just concerned about what goes in products.”

More than 400 people will attend the awards ceremony, at the Salford City Stadium, on January 30.