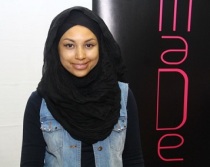 In a previous media report stated that Malaysia’s Hip Hop Queen, Mizz Nina has decided to sing only in front of women. This decision was made after she started putting on hijab, after coming back from pilgrimage last October.

At a meeting with Hajja Syazrina Azman, last Saturday, she said she decided to take a long rest from singing. On the other side, Mizz Nina opened a Muslimah fashion house called Medeena. This business has been ongoing since the past few months.

“Praise be to God, Medeena is getting more attention now. Medeena offers various choices of abayas, hijabs, jackets and long skirts which is in trend with today’s fashion, and what’s more important is that it is modest. We have received many invitations to join bazaars and also fashion shows. In June, Medeena will participate in the KL Fashion Week and a Hijab exhibition.”

“I think this is the time for me to take a long rest from singing. In the meantime, I’d like to focus more on my business. You can assume that I’m leaving my singing career for the time being. Until when, I’m not sure. Furthermore, I don’t think I’ll be singing in front of a huge crowd anymore,” she told Malaysian Digest.

Mizz Nina added, she will close down Mizz Demeanor, her previous fashion line with an urban concept to concentrate on Medeena.

Mizz Nina also stated that Medeena means a lot to her and she wishes to expand her business by launching a few more products to penetrate the halal market in the near future.

“I’m always fond of names that has an M and D. In Medeena, it has those letters. I also like Madina and ‘deen’ which means Islam.”

“It is better for me to focus on one brand at the moment and I see with Medeena, there will be more business opportunities to be taken over. I wish to produce my own line of halal makeup, so that there won’t be a problem when performing solat. Or maybe my own halal perfume. My target is to get into the halal market soon,” she said.

In the meantime, although singing is her passion, Mizz Nina claimed it is easy for her to leave her singing career because she is sure of the signs that was given to her by God. Through her Instagram account, she received support from her fans.

“Singing has always been my passion but it wasn’t hard for me to leave it. I am blessed to have fans who love my appearance now.

“I wear what I think is appropriate and comfortable. Some say although I’ve worn the hijab, I still look stylo to them. Some of my fans who aren’t in hijab also like my new appearance and they left positive comments on my Instagram,” she said.

Other than busy organising her business, Mizz Nina also received an offer to host an Islamic concept program, which will be in English, soon.

Her production will also release an educational program, ‘Caca and Cici show’ for children aged up to 8 years old.