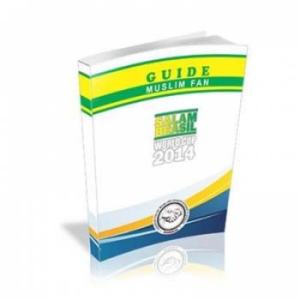 Muslim fans heading to Brazil to enjoy World Cup 2014 competition will find it easier to practice their religion after the publication of a new guide book that will provide them with addresses for mosques, halal restaurants and other Islamic services.

The 32-page guidebook titled, Salam [hello] Brazil, has been published by the Union of Islamic Associations of Brazil in cooperation with the Omani embassy in the South American country, a statement obtained by OnIslam.net said.

According to Muhammad Hussein Al-Zuqbi, the head of the Union, the book provides Muslim fans with addresses of Islamic centers, places of worship, Halal restaurants and entertainment centers whose activities are in accordance with Islamic Shari`ah laws.

It also includes a brief history of Islam and Muslims in Brazil and the effects of Islam in the Brazilian culture.

In a bid to reach a large number of Muslim fans, copies of “Salam Brazil” have been provided to airlines in Islamic and Arab countries to be distributed among Muslim passengers traveling to Brazil.

Algeria, the Islamic Republic of Iran, and Bosnia and Herzegovina are the Muslim countries whose international football teams will be present at the 2014 FIFA World Cup.

Also, a number of other teams including France, Ivory Coast, and Cameroon have Muslim players.

The guidebook is not the first effort by Islamic organizations in Brazil.

Working under the huge project of “Know Islam”, adopted by the Union of Islamic Associations in Brazil, the Islamic Call looks forward to distribute millions of printed flyers on selected topics about Islam.

They also aspire to print and distribute a million copy of the translation of the Noble Qur’an, in addition to the production of short films about Islam in Portuguese and different languages.

Hosted by Brazil for the second time, the FIFA World Cup football tournament would run from June 12 to July 13, 2014.

However, the Islamic Brazilian Federation puts the number at around one and a half million.

With no confirmed number of Muslims, the best indicator of the growth of Islam in the country is the rapid increase in the number of mosques.