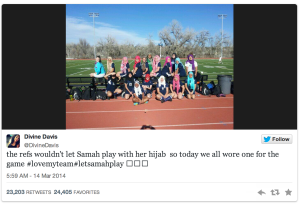 After watching their teammate get turned away due in part to her religious beliefs, the rest of the Overland High School girls soccer team in Aurora, Colo., displayed the true meaning of unity.

According to Yahoo Sports’ Eurosport, referees barred Samah Aidah from competing in a match while wearing an Islamic headscarf, or hijab. In an effort to stand behind Aidah, all of her teammates decided to don hijabs for their next game.

As seen on the photo courtesy of Overland High School player Divine Davis on Twitter, the entire team took part in the act of solidarity, including the coaches.

Although many of the players who wore the hijabs weren’t even Muslim, it was about much more than that. Rather than allowing their teammate to feel oppressed, the Overland players decided to take matters into their own hands.

Per Carol Kuruvilla of the New York Daily News, referees deemed that Aidah wearing the hijab in a game would have been “dangerous.”However, even FIFA has decided to allow players to wear headscarves during matches, according to Al Jazeera.

Aidah and her teammates were allowed to play while wearing the hijabs in the following match.

Davis is among those who don’t see any issue with female athletes being allowed to wear headscarves during competition, according to Kuruvilla.

“I think it is okay for girls to play sports in their hijabs and they should not be questioned or restricted from playing,” Davis said. “No matter what sports.”

Ultimately, the positives and negatives of wearing a hijab on the soccer pitch can be debated endlessly, but the actions of the Overland High School team should be applauded regardless.

Whether Overland High wins or loses every match moving forward, it is hard to imagine there being a team with more integrity and indivisibility.

What those girls did may seem somewhat minor on the surface, but it could very well lead to big changes across their sport.